I crossed a line today.

I tried . . . gram counting. I know, I know – but before you judge, please let me explain.

It all started with the sleeping bag . . .

During a sleeping liner test, I came to the conclusion that I might need to bring a sleeping bag instead. I hadn’t had mine out in a while, but from what I remembered it seemed rather heavy and large for my Camino packing plans. I wanted to weigh it (sadly, the company – Moonstone – went out of business some years ago so the internet was no help), so I got a luggage scale.

Why couldn’t I just guesstimate, you ask? Because I have kids, and I learned something after carrying them around all these years: things get a lot heavier the longer you hold them. Obviously the weight doesn’t vary over time – but it sure feels different after a while. Everything feels lighter when you first pick it up – but eventually you discover a thing’s real “carry weight.”

I can’t tell just by holding up a piece of gear if it will seem light later, or when combined with other things. And it would be kind of ridiculous to test carry every possible combo. So many factors would enter in on different trips, the method really wouldn’t deliver trustworthy data. So I found a scale at Wal Mart for $9, went home, and weighed the bag (3 lbs – not bad!).

Then . . . well, then things got a little out of control.

The next thing I knew, I had all my gear spread out across the bedroom and I was weighing everything. It was actually rather fascinating!

For example, I discovered that when my Nalgene bottle was full, it outweighed my backpack! My Frogg Toggs jacket was less than half the weight of my Marmot jacket (which, as I discovered a few weeks ago, is not completely waterproof).  And my guidebook . . . holy cow, that thing weighed in at a hefty 13.5 oz! Who knew?

As I went along I realized that all this data would be wasted if I didn’t write it down. So I . . . you know . . . made a spreadsheet.

At this point, I realized I might need help (the psychological kind). So I texted my Camino Cuz to admit what I was doing, hoping that our relationship would be strong enough to get passed this new obsession.

She only made it worse.

“At Least It Isn’t Drugs”

Not only was my cousin not disappointed in my gram geeking, she had been doing a bit of it herself. In fact, she had taken it to a whole other level.

She asked if I had ever heard of GearGrams. Turns out, some true gram geeks have made a website that allows you to list, describe, and categorize your gear as well as – you guessed it – record weight. It’s amazing – and it imports spreadsheets, which I did immediately. 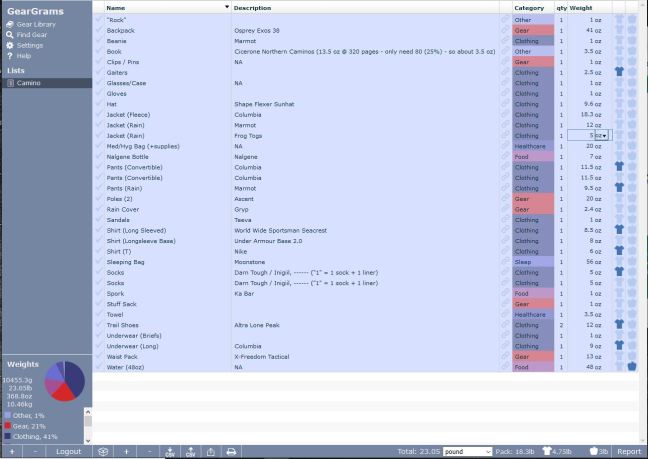 So there went my day!

“It could be drugs,” we keep telling ourselves. “At least it isn’t drugs.”

For example, just by removing the pages of my guidebook that don’t pertain to our route, I’d save 10 oz. That’s a quarter bottle of water! Just think what I could do by cutting my toothbrush in half!!!