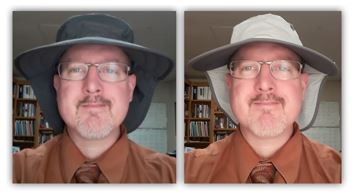 Protective and stylish! (Except stylish.)

I don’t tan well and cancer runs in my family, so I am not about to tempt fate with sunburns on the Camino. I also don’t like using sunscreen – it’s often messy, sweats into my eyes, absorbs into the bloodstream (but is totally safe, of course), and the stuff that really works is like some kind of gothic face makeup. So I looked into hiking hats.

The Sunday Afternoons Ultra-Adventure Hat was voted one of the top hiking hats on several review websites (here, here, here, and here, for example) and so it seemed like a solid choice. The hat’s selling features are almost all related to its appearance. LOL, just kidding. It’s kinda dorky looking, but who am I trying to impress on the Camino? So I threw fashion aside and decided to for full coverage in the head shade department.

Sun and heat protection are this hat’s purposes (it’s SPF50+), and in those departments, it excels. The brim is wide and offers whole-head shade at most angles. The cape keeps sun off the neck and ears even when backlit.

But the hat’s strengths don’t stop there.

First, it is ridiculously lightweight. It feels more like a sweatband than a hat when it’s on. At 60 grams (2.1 oz.), it’s barely worth counting even for gram geeks.

Third, it is exceptionally breathable – I can actually feel air blow across my head with the hat on. The cape is light enough to let the breeze through, but heavy enough not to float up and defeat its purpose for being there.

As many reviewers claimed, it does it’s job and does it well.

Unfortunately, the standard Ultra Adventure is not waterproof. As I discovered, the top vents let the water right in and the hat itself soaks through quickly.

Waterproof hiking hats exist – but they are heavier, hotter, and most other brands lack some or all of the other features this one has. But then I discovered there is a waterproof version of the Ultra Adventure called the Storm! I got the very last one on a crazy Amazon sale, and took it out for a spin.

Hiking in the Storm

The two hats share most of the same structural features that make the Ultra Adventure a great sun hat. The top vents are gone on the Storm though (the reflective stripes are just ornamental). It appears they took the material that the standard hat’s sweatband is made of and enclosed the entire inside of the Storm with it. This adds the waterproofing and some insulation.

To further deal with harsh weather, the Storm’s brim is triple reinforced with internal wires so it won’t flop around when weighed down with water or snow. The Storm also lacks the sunglass traps of the standard Ultra (probably required to keep it waterproof).

On the trail, the Storm was noticeably – but not terribly – warmer. It was about an 80 degree day with a cool breeze and while both hats felt good, the Storm didn’t let the welcome breeze through like the standard did. The standard Ultra seemed to have little initial affect on my head temp when I first put it on, but the Storm felt a bit warmer right away (about the same as putting on a knit baseball cap). While it wasn’t a deal breaker on this short and relatively cool hike, I imagine that on a hotter day – or one with no breeze – the difference would have been more unwelcome.

The real test, of course, was to see whether these totally expected and acceptable differences are worth the hat’s waterproofing abilities. So, it was off to the shower! 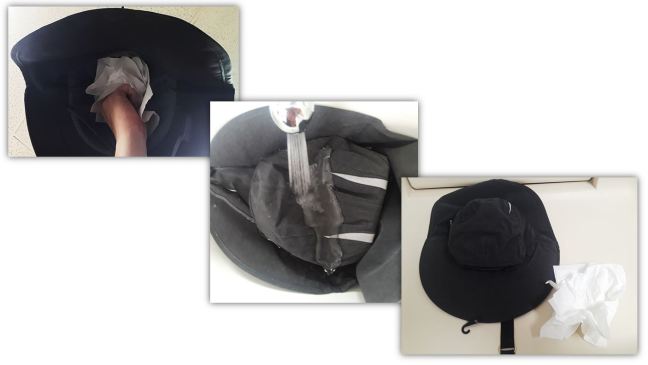 I decided to start with a small, concentrated water test. I balled up some tissue and held it in the head compartment while I ran water back and forth across the brim, top, and cape of the Storm hat.

After a minute of spray there was not a drop of moisture in the hat, and very few left on the outside because the water ran off the hat like glass. A couple quick shakes, and the whole hat was dry. Wow! Another actually waterproof waterproof item!

I later did the full shower test with my rain jacket and both hats figuring that maybe a rain hood plus the standard Ultra might be a good combo. When I put it on and pulled the hood up, the system became fairly waterproof – but once water soaked through the brim, it started collecting in the front of the hat and soaked into the sweatband. That would be bad if it was cold, but for the Camino it might actually be welcome.

I tried the Storm with the rain jacket on but with the hood down. There was absolutely zero soak through (again), and the cape protected my back from water coming in through the neck. Some drips did find their way inside the jacket because I didn’t have it zipped up all the way and cinched down. If the weather got too crazy, the hood would provide additional coverage. But it would be warmer.

I don’t want to feel like I am getting directly rained on or have water running off my head and down into my shirt. However, on days when it isn’t raining, I don’t want to “rain sweat” and have essentially the same problem. With the standard Ultra I risk the former, with the Storm, the latter.

It might be argued that the standard Ultra is more versatile. While I can’t make the Storm cooler, I can make the standard drier (with a hood). If I get into rain, I’ll be putting on my rain jacket anyway. That isn’t ideal, but when the sun comes out again, I’d be thankful for the air. (After testing some waterproof shoes, I have concluded that I am pretty much a hot-blooded hiker and I just don’t want much insulation if I’m not in freezing weather.)

However, when it comes to sun and rain protection, the Storm is superior to the standard.

If I knew for sure how much time I’d spend in the sun or in the rain, the choice would be easy. Having to choose one, though, is tough. The weather on the Primitivo in May seems to average in the mid 60’s and rain about half the days*, so the extra warmth (my only concern with the Storm) may not be as big a factor as I fear.

Finally, just because I have no one I am trying to impress doesn’t mean I shouldn’t look fab-u-lous – and the Storm looks . . . less . . . dorky.

*UPDATE: The weather has been between 10 and 15 degrees hotter than average this year.

I will bite the bullet and keep both